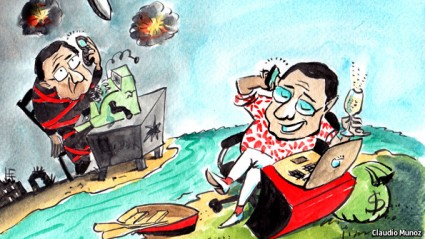 Good education, adaptability and networks helped Lebanese succeed outside their country. That’s a positive thing that came out of our “wasta” system for a change. Check out the full article [Here].

ON A recent flight from Beirut to Addis Ababa, Lebanese businessmen were swapping stories. “Business is excellent in Angola,” declared one. “I hear it’s good in Ghana?” inquired another. Flights out of Lebanon buzz with optimism. For Lebanese business “good education, adaptability and networks” are the keys to their success.folk, the juiciest opportunities are abroad.

More people of Lebanese origin live outside Lebanon than in it (perhaps 15m-20m, compared with 4.3m). Many have done well. Carlos Slim, a Lebanese-Mexican telecoms tycoon, is the richest man in the world. Carlos Ghosn, a French-Lebanese-Brazilian, is the boss of both Renault (a French carmaker) and Nissan (a Japanese one). Nick Hayek, a Swiss-Lebanese, runs Swatch, the biggest maker of Swiss watches.

Lebanese people have long had wanderlust. Ancient Phoenician merchants roamed the Mediterranean, setting up cities such as Carthage and Cadiz. In the past century and a half, waves of Lebanese have left for the Americas and west Africa. Lebanon’s long civil war prompted many more to pack. Some 7m Lebanese and their descendants now live in Brazil, 3m in the United States and at least 250,000 in west Africa. They do everything from running restaurants to dealing in diamonds. By and large, they find business easier elsewhere than back in their fragile motherland.