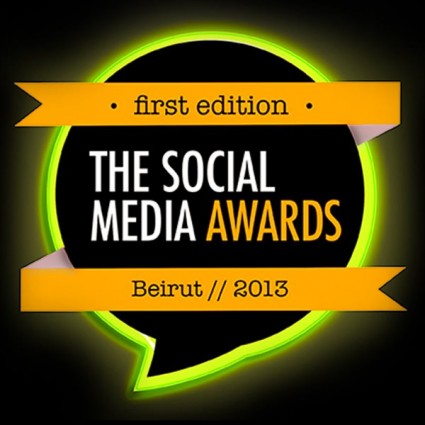 The Social Media Awards are happening for the first time in Lebanon and I thought it would be fun to share my nominations for the various categories listed. Before that, here’s how the selection process will occur:

Stage 1: Online Nominations
Members of the online community nominate candidates for different categories via our website www.SMABeirut.com. Users can nominate themselves, friends or an organization on business based on the criteria of each category. Their submission is accompanied by relevant material such as Facebook links, Twitter accounts, blogs and other platforms to support their candidates.

Stage 2: Judges Selection
Based on the nominations received, our team of experienced and celebrity judges from different backgrounds will be narrowing down the nominations in each category to seven (7) nominees within two weeks of closure of nominations. The whole process will be carried out in pure transparency and an announcement event will be held for the press and online community.

Stage 3: Final Vote
Members of the online community are asked to vote for their preference in each category over a period of one month. During this period, nominees will be able to campaign for obtaining votes.

I took a look at the judges’ list and the ones they chose are more than qualified for this job, with 1 or 2 exceptions which I will not name. One thing that I would have done differently is narrow down the nominations to 4, as I think 7 is too much.

Anyway back to the nominations, here it goes:

Best Blog of the Year
Beirut Spring: I’ve always been astounded by the insights Mustapha provides on the Lebanese society and Lebanon in general despite being abroad. He is concise, convincing, methodical and is among the very few bloggers that I agree with almost always. Oh and he never misses a chance to throw in a new term in every post and make me look for it online.

Best News Blog
Hummus Nation – The good thing about Hummus Nation is that his news are always reliable because he makes them up.

Best Lifestyle Blog
L’armoire De Lana – Lana has been pulling an impressive job ever since she launched her fashion blog. She’s posting daily, tweeting all day long, uploading pictures all the time. She’s doing it right and she totally deserves it.

Best Technology Blog
Tech-Ticker – A website founded by a group of Lebanese Technology enthusiasts covering the latest tech news and reviewing the most recent tech products.

Best Personal Blog
Gino’s Blog – Gino is truly commited to his blog and it shows through his posts. His views on certain topics are as far as they come from the conservative “Lebanese” thinking yet he manages to convince his readers most of the time. Neuromarketing at its best.

Most Engaging Media Personality
Magazine: RagMag’s Editor in Chief Fida Chaaban.
She devotes a lot of times to social media and interacting with readers and that’s not something easy to pull. In fact I don’t think I know any other media personality as devoted as her.

Best Performer
Nemr Abou Nassar: He was funnier when he started and I didn’t like his latest shows but he’s doing a great job online and deserves that award. The problem is here very few performers in Lebanon are active online to begin with.

Most Viral YouTube Video
I would have loved to say Buzz but it turned out to be a copycat from an old US commercial. I’ll go with LebaneseBrew’s Try Something Brave.

Most Engaging Media Personality on Twitter
TV/Journalist: Shada Omar.
Despite having almost 100,000 followers on Twitter, Shada dedicates time to almost everyone that interacts with her and is always interesting to talk to.

Most Engaging Diplomat on Twitter
HMA Tom Fletcher – If you wanna know why, read [this].